India's oil exports jump 48% in May as domestic demand shrank

London, (Quantum Commodity Intelligence) – Exports of refined oil products from India jumped to 5.74 million mt in May, up 1.856 million mt, or 48%, from April, after Covid-19 lockdown measures ate into fuel demand.

According to government data released Monday, road fuels accounted for more than 80% of the increase in exports, with a 58% rise in diesel shipments to 2.95 million mt and a 43% rise in gasoline shipments to 1.33 million mt.

Diesel exports were the highest since April last year, and 40% above levels seen two years ago in May 2019.

Gasoline exports were still 16% below pre-pandemic levels in May 2019.

The monthly increases in exports roughly offset falls in domestic deliveries, according to the Petroleum Planning & Analysis Cell data, apart from for fuel oil, which likely saw stocks drawn down after imports also dropped.

Total imports of refined products were also down 345,000 mt, or 10% on the month, to 3.15 million mt, the lowest amount since April last year when just 2.81 million mt was imported.

India's crude oil throughput and refined products production were also both down in May, by 7.7% and 4.6% respectively, as refiners sought to minimise production slates on low domestic demand and relatively weak cracks for many products in the Asia-Pacific region.

PPAC data also showed that crude oil imports for the month were 5.5% lower compared to April at 17.26 million mt.

There was light at the end of the tunnel for India's refining sector though, after data released last week showed transport fuel demand in the first half of June up 11% on the month as Covid restrictions ease and the country edges towards normality. 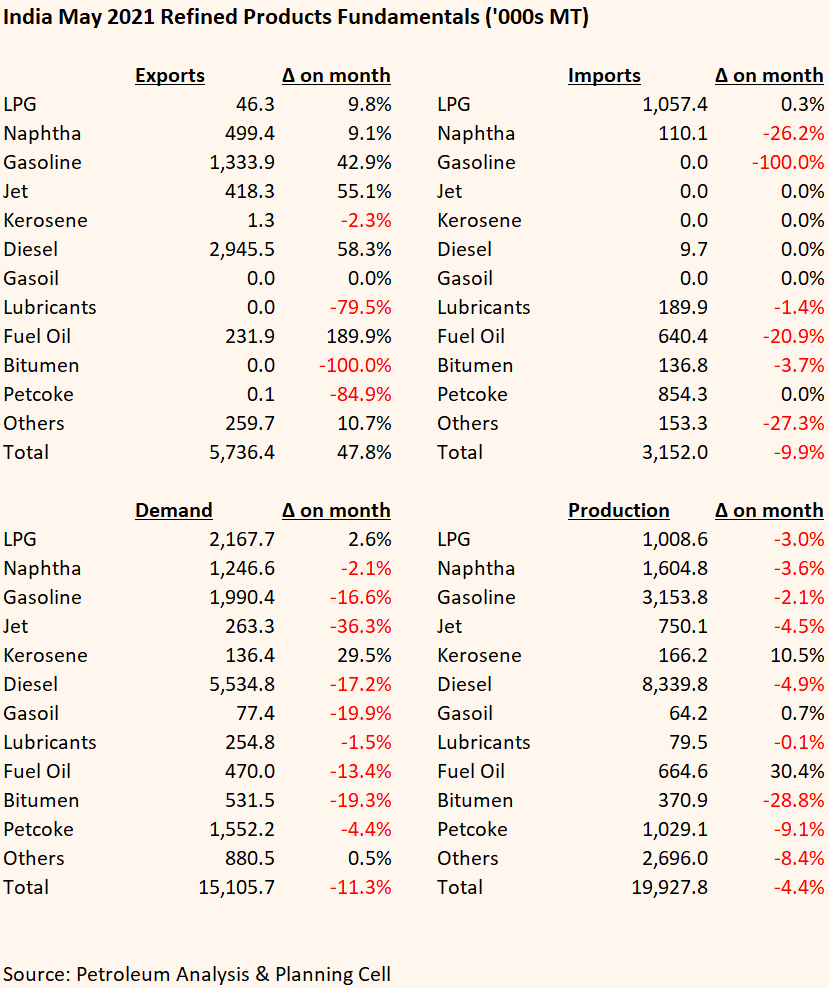 Cracks for Asian oil products fall despite higher Japanese and Indian demand
Refined Products
Spot refining margins for most key products in Asia fell by 1630 Singapore time, as a rally in...